The great American artist Winslow Homer (1836-1910) created some of the most breathtaking and influential images in the history of illustration, oil, and watercolor, one of America's undisputed masters.

In September 2012, the Portland Museum of Art will open the Winslow Homer Studio to the public. One of the most significant locations in the history of American art, the Studio, located at Prouts Neck, Maine, is where Homer lived and painted many of his masterpieces from 1883 until his death. Located on the rocky coast of Maine just 12 miles from Portland, the Studio was purchased by the Museum in 2006 from Charles Homer Willauer, the great grand-nephew of Homer. The Museum has been restoring the building to the period when Homer lived there from 1883 until his death in 1910.

A National Historic Landmark, the renovated Winslow Homer Studio will celebrate the artist’s life, encourage scholarship on Homer, and educate audiences to appreciate the artistic heritage of Winslow Homer and Maine. Tours of the Studio will begin from the Museum on Monday, September 24, 2012, and tickets will go on sale this summer on the Museum’s website.

In High Cliff, Coast of Maine (seen below), the ocean wages a mighty and relentless assault on a rocky cliff at Prouts Neck, where Homer took refuge from civilization for thirty years. Two small figures at the upper right provide the only hint of man's witness to the natural drama. Homer was despondent when the painting did not sell quickly, saying, “I cannot do better than that. Why should I paint?” Indeed.

Beauty Inside and Out

There isn’t a day that goes by that I don’t think about the master artist Knox Martin.  His beautiful soul has permeated my life for over four years since our first meeting in his Washington Heights home and studio in New York City.  I knew from the moment I met Knox, that he was gold. His warm, expressive eyes penetrate you in a way you feel like you’re the only person on his planet. Much like his father, William Knox Martin, an aviator who was the first man to fly over the Andes Mountains, he has pursued his life with gusto!

Knox served in the U.S. Coast Guard on a flotilla, putting him in harm’s way at Omaha Beach during the invasion of Normandy, France in World War II; studied at the Art Students League of New York on the G.I. Bill after the War; received recognition by Franz Kline, Bill de Kooning, and the important Stable Gallery, Charles Egan Gallery, and the Whitney Museum of American Art early in his career; taught at Yale, New York University, University of Minnesota, the International School in Italy, the Art Students League of New York; and traveled the world, seeing him in photographs riding an elephant, lounging with a tiger, or telling a tale about his remarkable encounter with a massive whale.

Knox’s stunning work encompasses drawing, painting, sculpture, mosaics, multi-story murals, and poetry. Every time I seek more information about him, I’m really overwhelmed by the depth and sincerity of this artist who has dedicated his life to spreading his message of spirituality. I’ve been privileged to sit with him as he recites Yeats with tears in his eyes, while surrounded by the incredible art in his studio. We’ve discussed jazz and 1950s art-world intrigue, talked through his painting of grapes or how he executed his latest creation, he has shown me how he makes his favorite coffee, drawn me, and cooked for me on more than one occasion. I’ve even seen him sling a knife on the floor over a guest mutilating his meticulously prepared pasta dish!

I celebrate Knox on his 89th birthday, February 12—to Knox, with love. 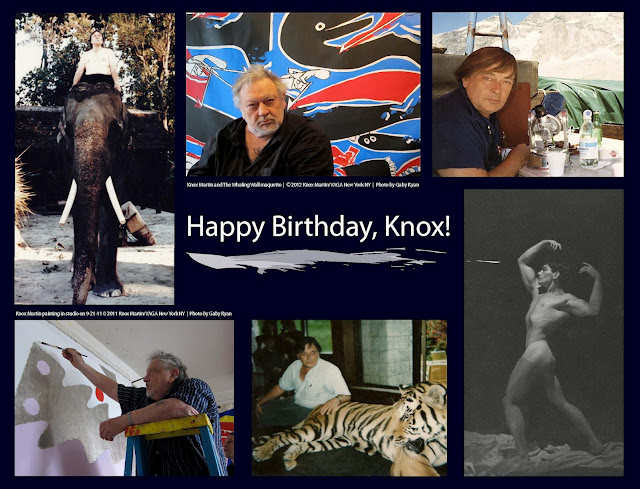