The Ballets Russes—the most innovative dance company of the 20th century—propelled the performing arts to new heights through groundbreaking collaborations between artists, composers, choreographers, dancers, and fashion designers. Founded by Russian impresario Serge Diaghilev (1872–1929) in Paris in 1909, the company combined Russian and Western traditions with a healthy dose of modernism, thrilling and shocking audiences with its powerful fusion of choreography, music, and design. 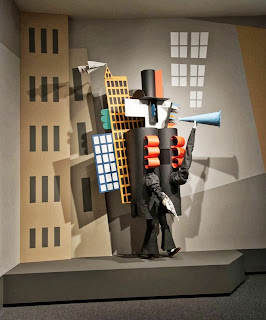 Legendary artist Pablo Picasso was introduced to Diaghilev by Jean Cocteau in 1916, leading to his first ballet commission for Parade in 1917. Picasso artfully designed costumes and stage sets, working closely with the Ballets Russes for several years, even marrying the dancer Olga Khokhlova during this period.

The sets were modern, innovative, and new, the costumes colorful, complex, and whimsical. The sheer size of some of the costumes challenged the dancers to gracefully execute the ballet. But, the overall effect was a dazzling mix of Cubism and Picasso's playfulness. See this and so much more at Diaghilev and the Ballets Russes, 1909–1929: When Art Danced with Music at the National Gallery of Art, Washington now through September 2, 2013.

Currently at the National Gallery of Art, Washington, is Diaghilev and the Ballets Russes, 1909-1929: When Art Danced with Music through September 2, 2013. A hurried lunchtime visit to the exhibit only gave me a taste of the wonderful breadth of this exhibition. If you are fascinated by the marriage of dance, theater, music, and art, this exhibit will thrill your senses. Other artists of note who worked with Diaghilev included Pablo Picasso, Henri Matisse, among others. The exhibit masterfully integrates, paintings, posters, costumes, music, stage sets, and video throughout. You could easily spend an entire afternoon absorbing this magical moment in ballet.

I was very drawn to the work of Giorgio de Chirico and the presentation of Le Bal. Confined to one room of the exhibit, you are seemingly transported into the set itself with the ability to see the costumes at close range. Hence, the focus of this blog post.

Le Bal
A ballet in one act and two scenes

While the Italian Surrealist painter, Giorgio de Chirico, had worked in theater design since 1924, his commission from Diaghilev for Le Bal gave him his most public success. As a version of the popular theme of the masked ball, the story’s dreamlike quality explored the nature of duplicity, ambiguity and deception. De Chirico drew upon his interest in desolate, devoid of people built spaces for his design of the ballroom, an austere room with exaggerated cornices, strangely proportioned openings and scattered with fragments of classical architecture. This theme is echoed in the guests’ costumes, rendering each performer a movable element of an architectural ensemble. Jackets and trousers became pilasters and columns, shirts and dresses roughly sketched examples of the classical orders. Their complexity and weight was further laden with stuccoed wigs for the dancers, adding to an air of ossified antiquity even though Balanchine’s choreography was light and acrobatic. 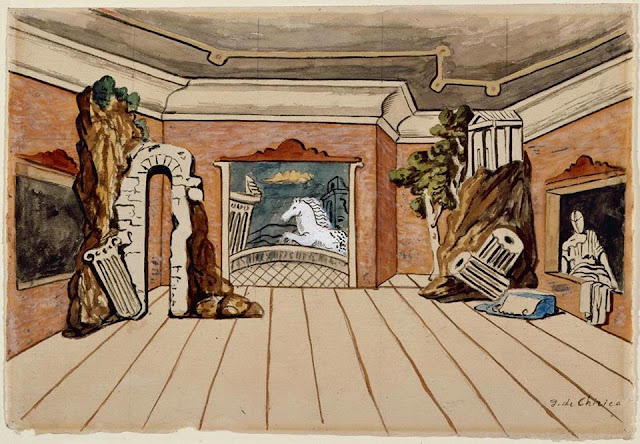 A young man, dressed as a military officer, attends a masked ball where he meets a beautiful masked lady accompanied by an old astrologer, and falls in love with her, even as she flirts with his rival, a young Italian man. While overseen by the ballroom’s giant classical statue, which is possessed of magical powers, the sylphides mischievously dress to imitate the couple in order to confuse their suitors. The young man finally persuades the lady to remove her mask and is dismayed to see her as an old woman. He tries to leave but she pursues him, and as the ball ends the old woman leaves on the arm of the astrologer. As she passes the young officer she and the astrologer both remove further masks, revealing them as a beautiful young couple. Attempting to follow them, the dazed young officer is held back by the statue to contemplate his behavior. 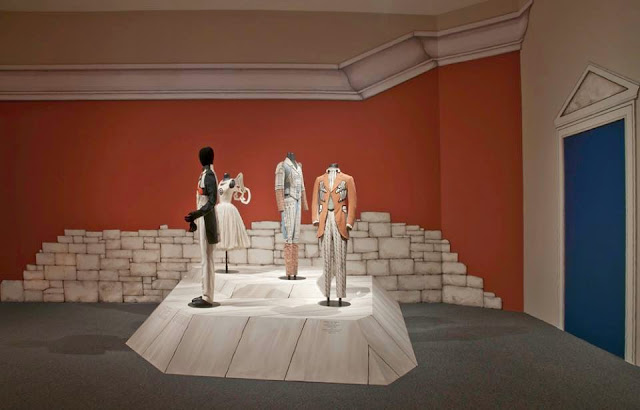 Artist Elaine de Kooning, known for her contemporary, gestural portraits, was chosen in 1962 to create a portrait of President Kennedy for the Truman Library. She had seven informal sessions in Palm Beach, Florida, with Kennedy at the end of December 1962 and early January 1963. The images capture Kennedy’s restless energy, and colors evoke a coolness and detachment not always obvious to his admirers.

De Kooning characteristically immersed herself in the project, turning out hundreds of drawings and 23 finished canvases in her attempt to capture the President's restless energy. Because Kennedy had no time for formal sittings, de Kooning climbed a stepladder toting her charcoal, pencils and pad for a better view of Kennedy, who fidgeted constantly as he conferred with aides. Caroline Kennedy, a toddler, painted beside de Kooning while sitting on the floor. After Kennedy's assassination on November 22, 1963, she stopped painting for almost a year.

In Elaine de Kooning: The Spirit of Abstract Expressionism, Selected Writings, she tells the story of drawing President Kennedy in her own words:

"President Kennedy was off in the distance, about twenty yards away, talking to reporters, when I first saw him—and for one second, I didn’t recognize him. He was not the grey, sculptural newspaper image. He was incandescent, golden. And bigger than life. Not that he was taller than the men standing around; he just seemed to be in a different dimension."

"One of the reasons I was asked to do the portrait is that, with luck, I can start and finish a life-size portrait in one sitting (after a couple of preliminary sketches to determine the pose and familiarize myself with my impression of the sitter). After years of working on my portraits (mostly of friends) for months at a time, I found myself getting bogged down in overly conscious effort and discovered that by working swiftly I could enter into an almost passive relationship to the canvas and get closer to the essential gesture of the sitter. However, working at top speed this way, I require absolute immobility of the sitter. This was impossible with President Kennedy because of his extreme restlessness: he read papers, talked on the phone, jotted down notes, crossed and uncrossed his legs, shifted from one arm of the chair to the other, always in action at rest." 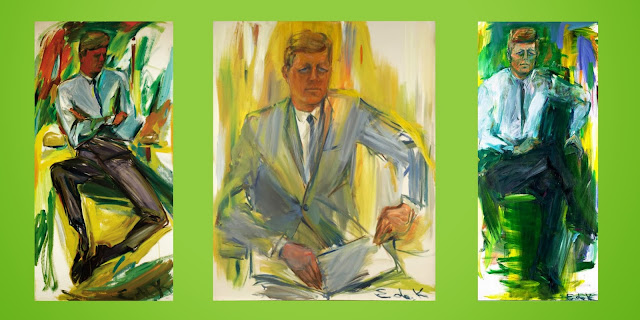