Knox Martin's latest offering of Flowers is exquisite. While I could never choose a favorite from this beautiful collection, his Flowers—Homage to Matisse (2011) makes me euphoric!

This tribute to Henri Matisse's The Red Studio (1911) is stunning. His overall use of red infused with blue and green take aim, yet Martin defines his own use of space. He appropriates imagery from the earlier painting—the white outlining of objects, a round plate in the lower left, the vines from a vase, and the still life-worthy table dominating the left side of the painting. The patterns in the blue plate and the swath of green on the right seem to nod to Matisse’s affinity for using multiple patterns and fabrics in his work.  And, is that green triangle in the center, one of the missing hands from Matisse's clock?

Yet, Homage is distinctly Knox! On our first visit to Knox, my partner, James, took him a huge bouquet of flowers and upon presenting them to him, he said, “Oh, great! Now I have to draw the f*cking things!”  He’s a gem. I celebrate Knox honoring Matisse and Red Studio one hundred years later! 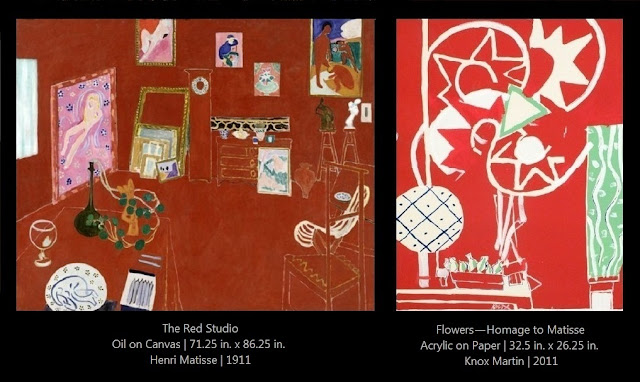 The Clyfford Still Museum announced that it will open its doors on November 18, 2011. The museum, which will house 94% of the artist’s total creative output, the majority of which has never been on display, will reintroduce the public to the life and work of Clyfford Still, one of America’s most significant yet least understood artists. No previous exhibitions of the artist’s work have been able to present the full trajectory of Still’s 60-year career, including his rarely seen figurative works from the 1930s, paintings from the 1960s and 1970s created after Still’s retreat from the commercial art world, and the hundreds of works on paper that the artist created, often on a near-daily basis.

After achieving national recognition and prominence for his abstract works in the 1940s and early 1950s, Still ended his relationship with commercial galleries in 1951, infrequently exhibiting his work thereafter. Following the artist’s death in 1980, the Still collection, comprising approximately 2,400 works by the artist, was sealed off completely from public and scholarly view. Still’s will stipulated that his estate be given in its entirety to an American city willing to establish “permanent quarters” dedicated solely to his work, ensuring its survival for exhibition and study. In August 2004, the City of Denver, under the leadership of Mayor John Hickenlooper, was selected by Still’s wife, Patricia Still, to receive the substantial Still collection. In 2005, Patricia Still also bequeathed to the city her own estate, which included select works by her husband as well as his complete archive.

I saw a few paintings by Still at the Denver Art Museum in a small exhibition in October 2008.  The exhibition was dedicated to the soon-to-be-constructed Still Museum adjacent to the existing Art Museum in Denver.  This is quite a legacy.
Posted by Cary Knox 1 comment: