There's Something About Matisse . . .

While paging through the book, I found a letter typed on stationary from the Pierre Matisse Gallery in New York. The letter is addressed to a college professor in Kingston, New York who had inquired about a poster from the gallery. It is signed by Pierre's wife, Maria-Gaetana Matisse. A quick Internet search revealed Pierre Matisse was the youngest son of the artist who opened a gallery in New York in 1931. I'm assuming this book belonged to the professor and she tucked the letter inside it. [I'm guilty of stuffing something inside books myself all the time!] Sometimes thinking about the journey a second-hand book may have taken is part of the fun of acquiring it. Pierre and Maria amassed a significant collection of 20th century art, donating over 100 of those works to the Metropolitan Museum of Art.

Philippe de Montebello, director of The Metropolitan Museum of Art, commented: "The Pierre and Maria-Gaetana Matisse Collection is both an historic and highly personal one, assembled by an eminent art world figure who formed close friendships with many of the artists whose work he represented and acquired. The collection is also notable for the number of important works by Henri Matisse, bequeathed from father to son. We are extremely grateful to the Foundation for this generous and meaningful gift, which enormously enhances the Metropolitan's collection of modern art."

I know Knox Martin has much to say about Matisse, and I would love to hear the wisdom he commands of the master. Earlier in the week while in Boston, I visited the Isabella Stewart Gardner museum. The Terrace, Saint-Tropez (1904) hangs in the front room. I also credit my partner, James Brock (JKB), for continuing to share his knowledge and furthering our own intellectual curiosity about Matisse. His masterful pastel saluting Harmony in Red (1908) hangs in my sight as I write this. Matisse is forever near me.

Knox Martin Tells Me a Story About Robert Rauschenberg

I have to start by saying that anything I am going to write about Knox Martin is going to be a love-fest! Every moment I can spend with the master artist is a special moment that I cherish. When he speaks, I listen. He told me a great story about sharing his studio with fellow artist Robert Rauschenberg. Knox said he had a work that Rauschenberg had given him that wasn't signed. He asked Bob for a note authenticating it, and Bob told him no!

Knox likes to tell that Rauschenberg had the nerve to go around saying he studied with (Josef) Albers at Black Mountain College, and Albers couldn't stand the son-of-a-bitch! I let him use my studio for two years, and he won't sign a damn note! Knox said when he asked Rauschenberg why he wouldn't send the note, he replied, "because you're better than me!"  I adore him! 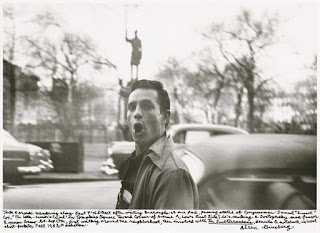 National Gallery of Art | Ginsberg photographed his friends and captured snapshots of his life. His friends just happened to be Jack Kerouac, Neal Cassady, and William Burroughs. This collection of photographs chronicles the lives at the epicenter of the Beat Generation. These guys were hot. They had a hopped-up, creative exuberance that bounce off these prints. Ginsberg captured in these photos, a feeling that a bunch of guys—up for anything—are enjoying life, experimenting with mind-altering substances, pondering their existence, and pushing the boundaries of their conventional time. Very cool.


Kerouac was asked by the editors of a dictionary to define the Beat Generation and described himself and his friends as a group whose members express "a relaxation of social and sexual tensions and espouse anti-regimentation, mystic disaffiliation and material-simplicity values, supposedly as a result of Cold War disillusionment." There is no reason to expand on that.
Posted by Cary Knox No comments:

Why Do I Want to Write About Art?

I love to look at art, read about art, talk about art, watch and participate in the process of art, and write about it. I love an artist. I love being around artists and their vibrating, creative energy. I am going to use this vehicle to fling all that interest onto this canvas—my blog.
Posted by Cary Knox 2 comments: