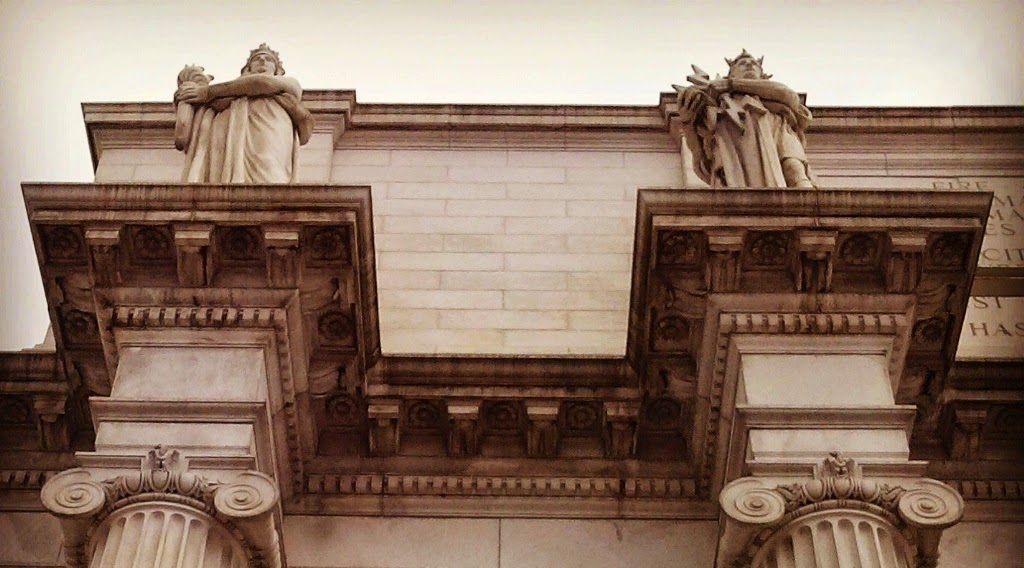 In 1901, the U.S. Senate Park Commission invited master American architect and planner Daniel Burnham to orchestrate a sweeping urban plan for Washington, D.C and make it in a setting that was both practical and grandly befitting a world capital.

Burnham, remembered for his work constructing the stunning “White City” in Chicago for the 1893 World’s Columbian Exposition, would help create the colossal architecture now associated with the National Mall.  He designed Union Station to remove the rail lines from the center of the Mall, which had become a tangle of paths, gardens, and buildings, and brought two major railroads—the Pennsylvania and the Baltimore and Ohio—into one terminal.

The white granite and classic lines of Union Station set the mode for Washington's classic monumental architecture for the next 40 years through the construction of the Lincoln and Jefferson Memorials, the Federal Triangle, the Supreme Court Building, and the National Gallery of Art.

Completed in 1908, the Beaux-Arts national historical landmark was constructed with bones of modern concrete and steel. The 96-foot high coffered Main Hall ceiling shimmers with gold leaf, reflecting light onto the expanse of its marble floor through spacious skylights and windows, while 26 centurion statues stand at attention overhead.

When the building first opened, it also featured a private, secure waiting room for the president and his visitors, as well as a public dining room with walls covered in murals modeled after those excavated at the ancient Roman cities of Pompeii and Herculaneum.

I captured the following images during a behind-the-scenes tour for winners of the National Trust for Historic Preservation Instagram contest. The Trust has designated Union Station as part of their National Treasures program. 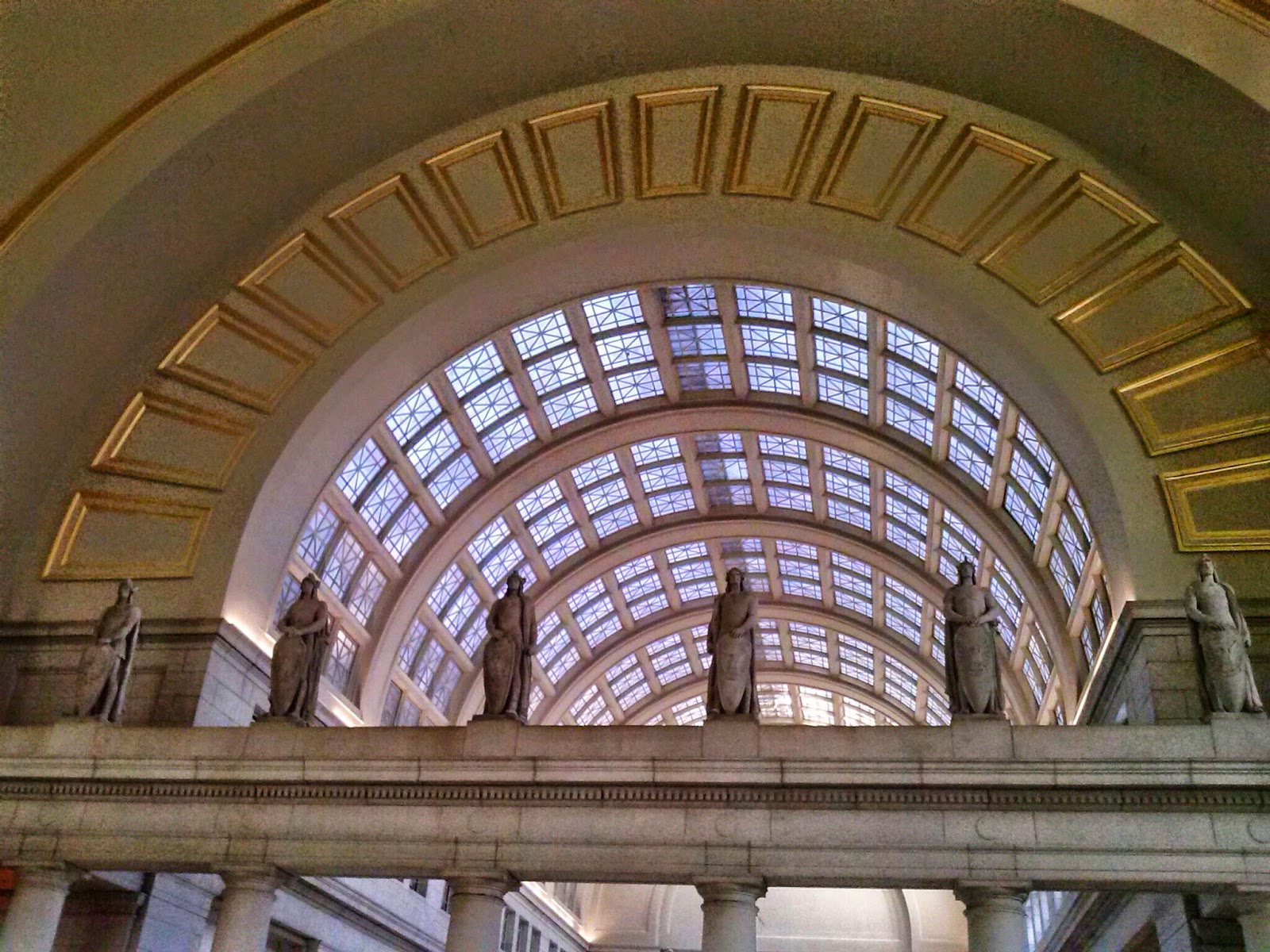 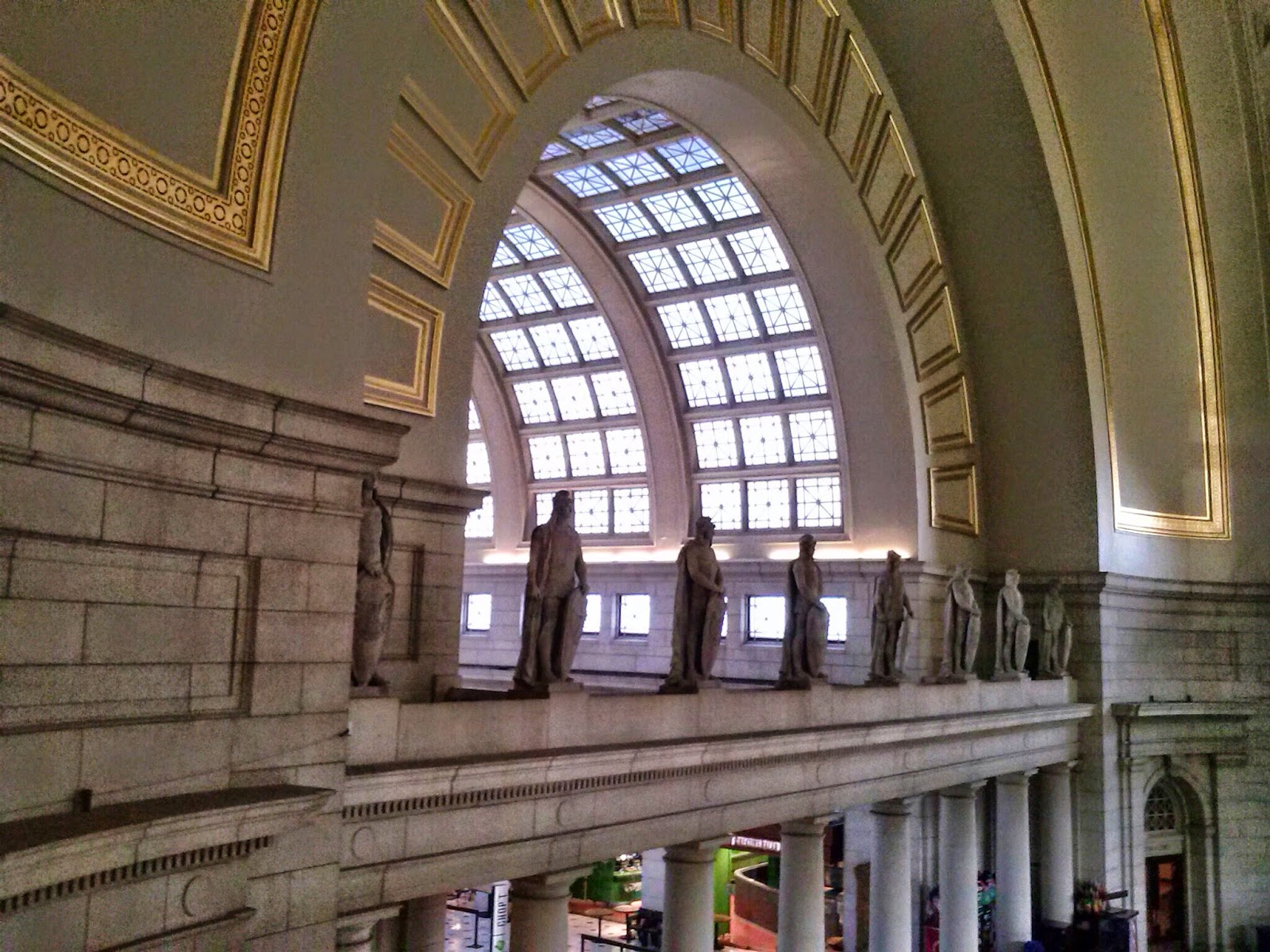 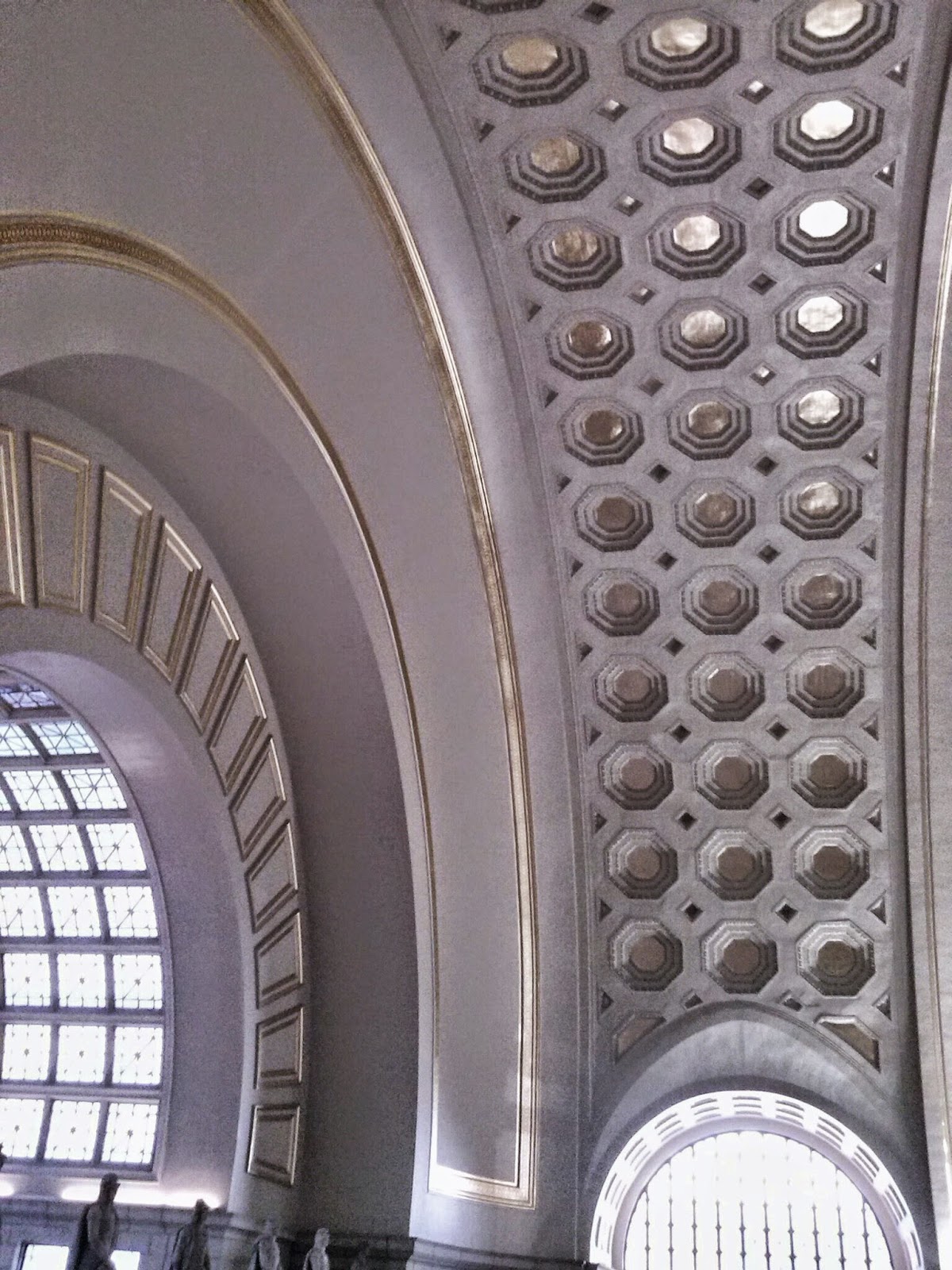 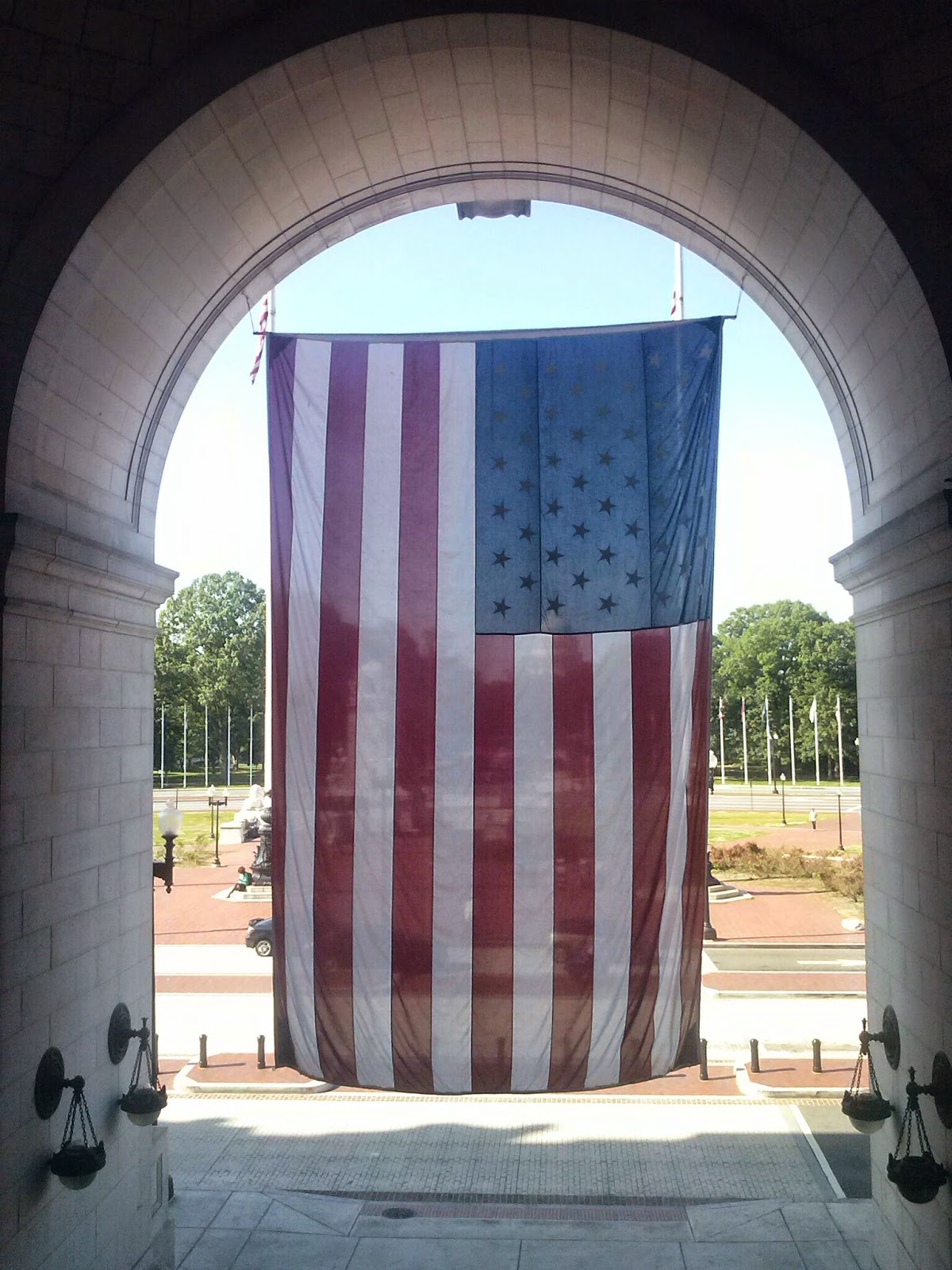 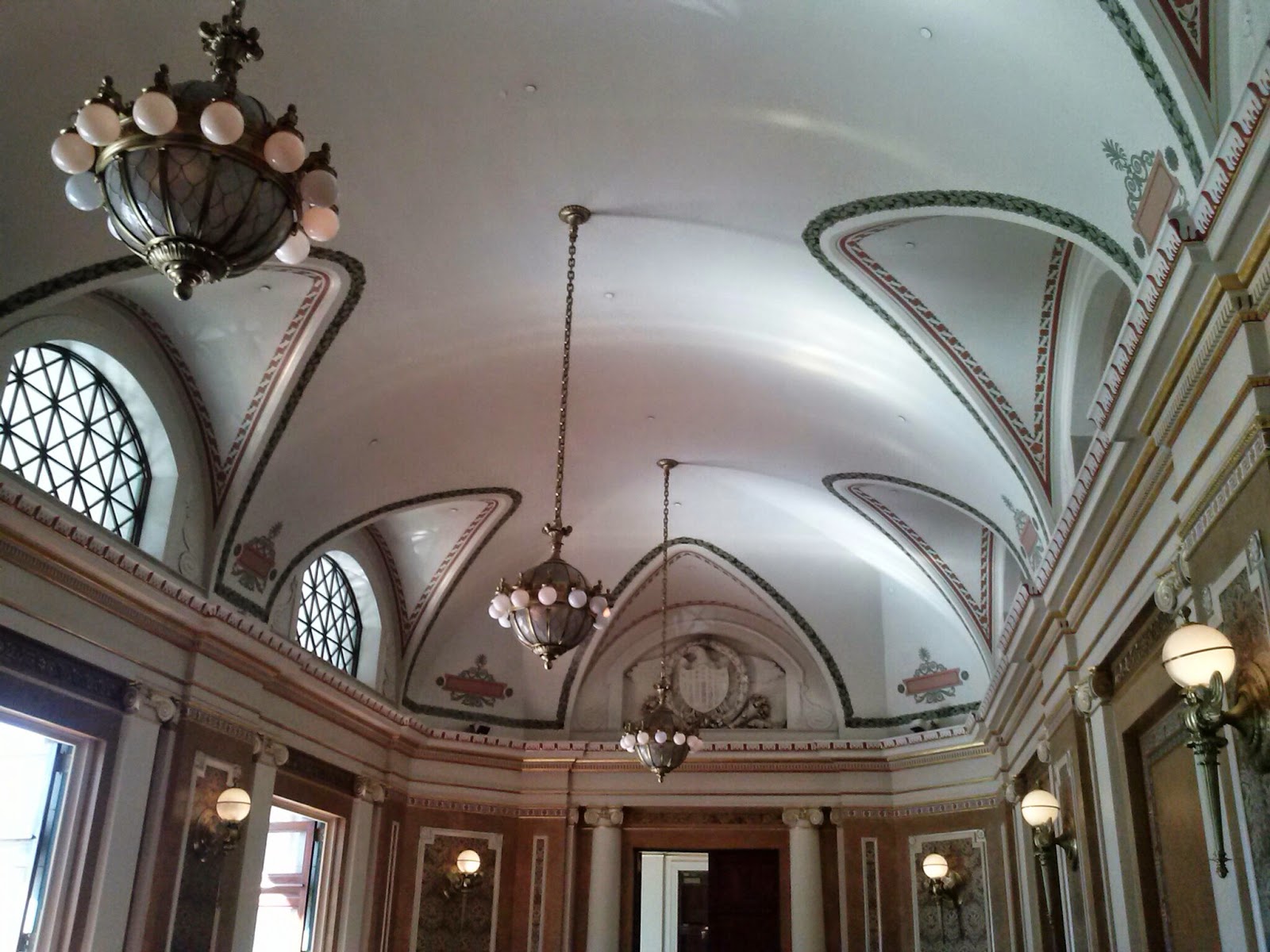 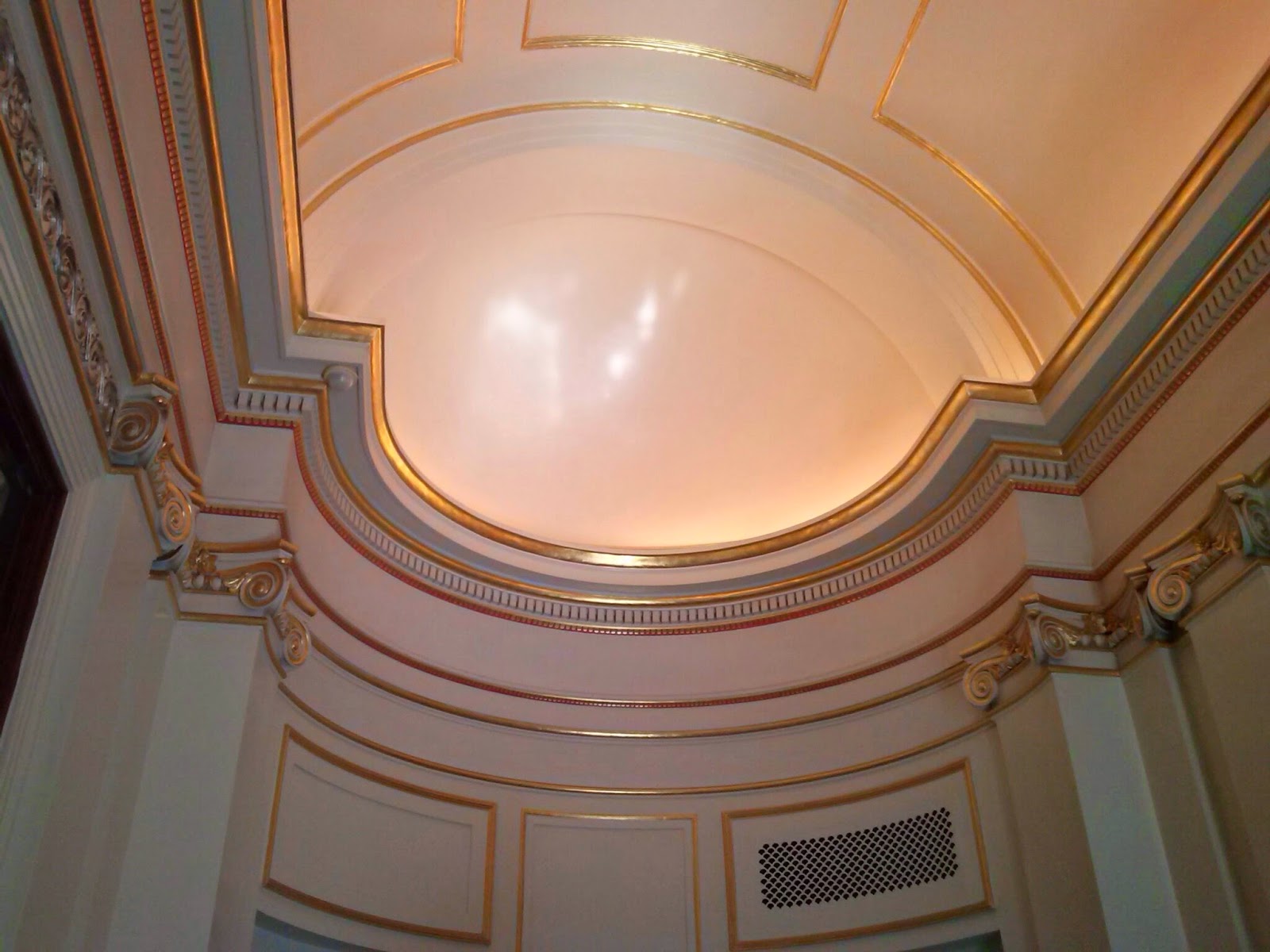 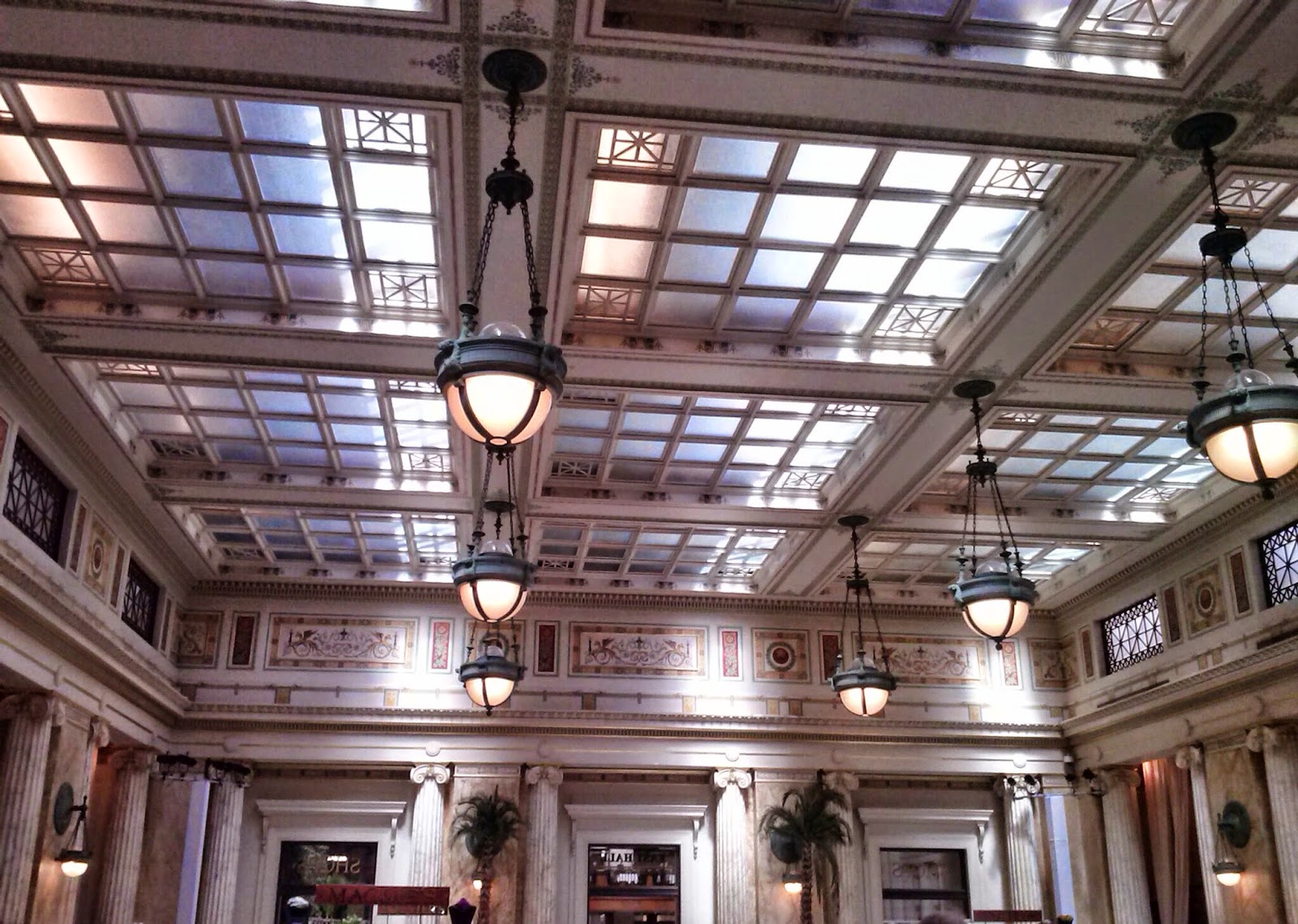 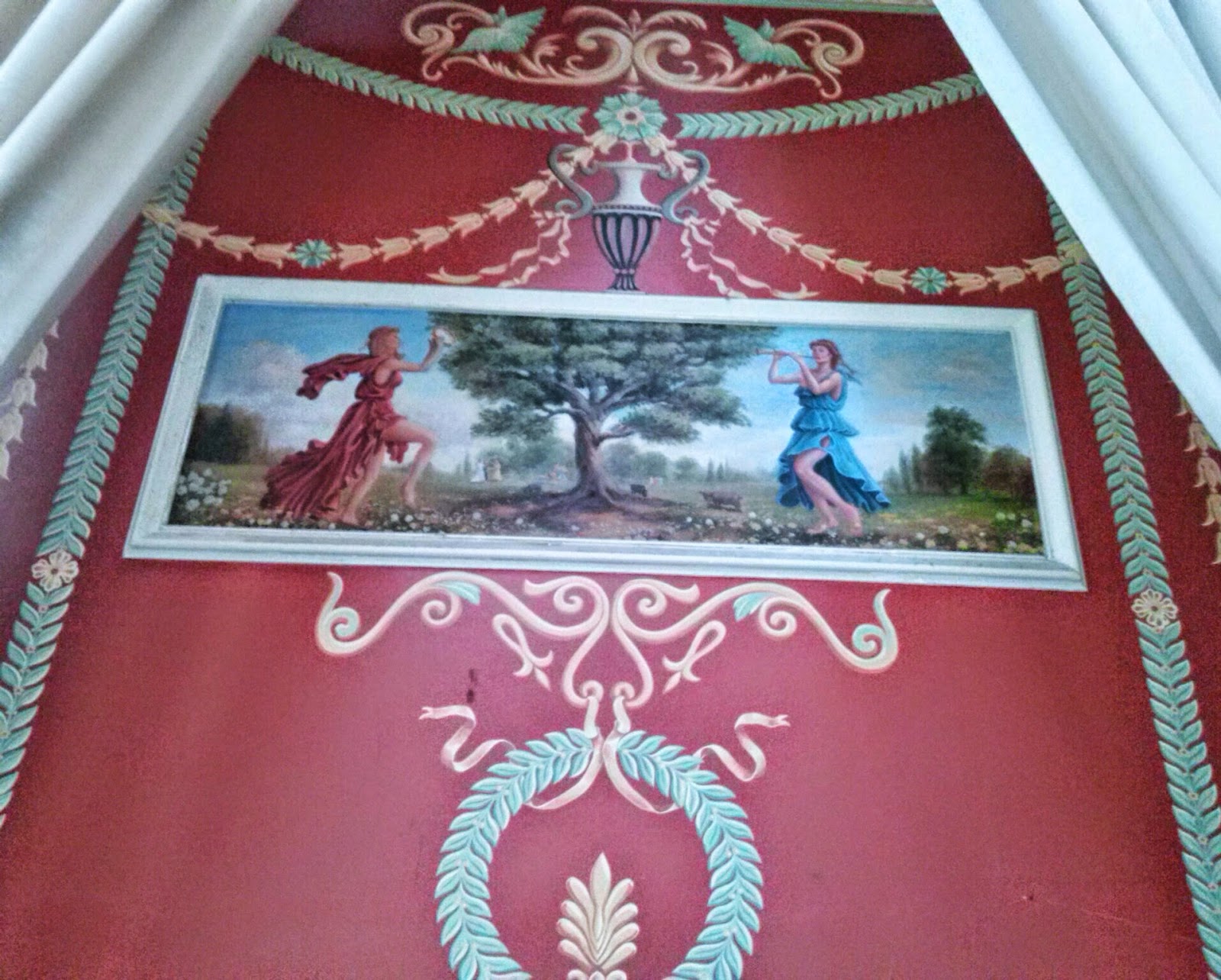 Fun Fact | On January 15, 1953, an out of control train on Track 16, crashed through the staionmaster's office, a newsstand, and into the main concourse of the station. Miraculously, no one was killed. A tower crew member, located about a mile from Union Station, was able to warn the stationmaster that a runaway train was on its way.  The concourse was cleared in just two and a half minutes. Within hours, the marble floor of the station collapsed under the weight of the locomotive.  Ninety-six hours later, President-elect Dwight Eisenhower's inaugural train rolled to a stop on Track 16 into a concourse that showed little evidence of the accident.

In the summer of 1494, soon after his engagement, Albrecht Dürer made a startlingly intimate drawing of his fiancée Agnes Frey. One might have expected a twenty-three-year-old to depict his betrothed as a source of love, or comfort, or well-being, all the more since her substantial dowry would soon launch his independent career. Instead, Albrecht showed Agnes twisted up in a knot of anxious introversion. She looks withdrawn and preoccupied, and the circles under her heavy-lidded eyes may even make one think she has been crying.

In its frank portrayal of an informal moment of unguarded emotion, there had never been a drawing quite like this before. Typically portraiture was honorific and meant to represent the exemplary virtues of the person shown; Dürer instead often sought to capture the idiosyncratic and psychological characteristics of the people he portrayed. He was fascinated with the close scrutiny of dark and brooding emotion. This is especially evident in his self-portraits, many of which show him in states of melancholy, doubt, or disease. Consider the self-portrait that he drew at the age of thirteen. It is made in ravishingly fine silverpoint, yet his large, staring eyes have a curiously anxious and unsettled look. The precocity evident in this sheet is not only in the flawless technique, but also in the impulse to self-examination.

Portraiture in the Age of Abstraction

Now at the National Portrait Gallery, Face Value: Portraiture in the Age of Abstraction features mid-20th century artists who were reinventing portraiture at a moment when most agreed that figuration was dead as a progressive art form. And yet, with startling freshness and a touch of defiance, a group of young artists demonstrated the value of exploring the face and figure.

I was thrilled to see some of the Gallery's permanent holdings of portraits alongside many stunning and important works on loan for this exhibition. It was a treat to see the depiction of poet and Museum of Modern Art curator Frank O'Hara painted by Jane Freilicher and the cutout by Alex Katz, that up until now, I had only seen images in books.

Not only did they paint each other and their friends, but two stunning works in the Gallery's permanent collection in this exhibition include portraits of the art critics who helped define the Abstract Expressionist movement, Clement Greenberg and Harold Rosenberg.

With more than 50 paintings, drawings, prints, and sculpture from approximately 1945 to 1975, Face Value highlights the innovations of American portraiture hiding behind the vogue for abstraction. Artists such as Alice Neel, Elaine de Kooning, Robert Rauschenberg, Beauford Delaney, Romare Bearden, Fairfield Porter, Jamie Wyeth, and Andy Warhol, along with lesser-known artists, pushed the boundaries of portrait traditions. Inspired by the theories and ambitions of the Abstract Expressionists and keenly attuned to the themes of their own turbulent times, they reinterpreted human portrayal, reinventing portraiture for the next generation.

Hitler Album of Nazi Looted Art Given to the National Archives 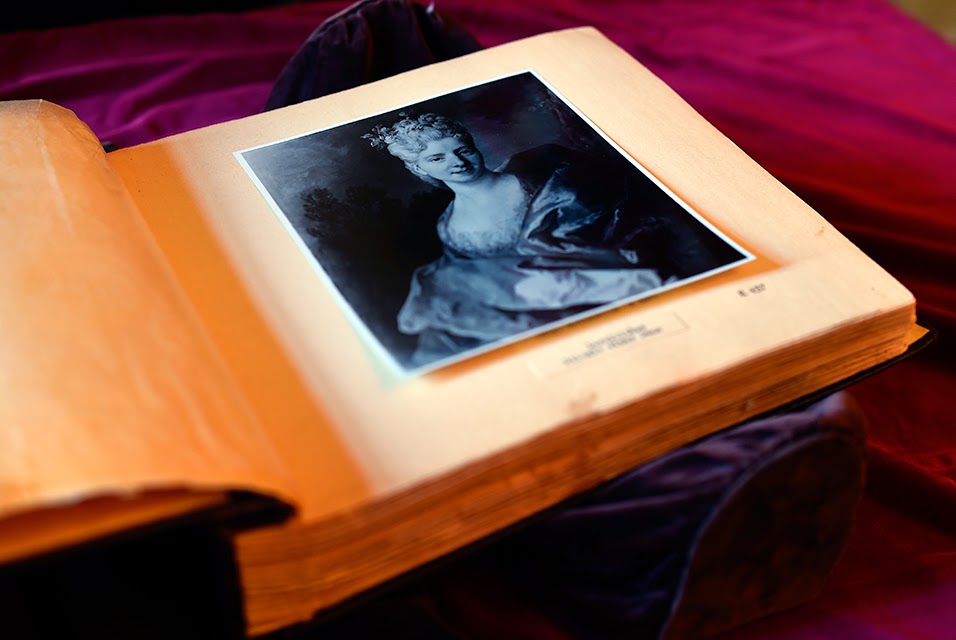 To mark the May 8 anniversary of the end of World War II in Europe in 1945, the National Archives in Washington held a press conference yesterday to unveil the last known leather-bound "Hitler Album" of art works stolen by the Nazis during the war. The Monuments Men Foundation donated this album to the National Archives, which was found at Hitler's home in Berchtesgaden, Germany, in the closing days of the war and has since been in private hands.

Created by the staff of a special Nazi task force, the Einsatzstab Reichsleiter Rosenberg (ERR), the so-called "Hitler Albums" document the unprecedented and systematic looting of European art by the Nazis, a story recently brought to the screen by George Clooney in The Monuments Men film. The ERR was the main Nazi agency engaged in art looting in Nazi-occupied countries. As the ERR looted, photographed, and catalogued French collections, they created albums, including the one donated. Each page of the album shows a photograph of one stolen item.

After the war, the U.S. Army discovered 39 of these albums and turned them over to the Monuments Men for use in identifying art work to be restituted. These volumes, in the holdings of the National Archives, served as evidence in the Nuremburg trials to document the massive Nazi art looting operations. Until recently, it was believed that the missing ERR albums had been destroyed. Thanks to the Monuments Men Foundation, four additional albums have been recovered, and the fourth was donated at this event.

Edgar Degas and Mary Cassatt at the National Gallery of Art

Edgar Degas's (1834–1917) influence on fellow impressionist Mary Cassatt (1844–1926) is widely known, but her role in shaping his work and introducing him to American audiences is fully examined for the first time in Degas/Cassatt. On view at the National Gallery of Art, Washington—the sole venue worldwide—from May 11 through October 5, 2014, the exhibition includes some 70 works in a variety of media.

The Gallery is exceptionally rich in holdings by both artists, with one of the finest collections of works by Cassatt in existence, totaling 119, and the third largest collection of works by Degas in the world, totaling 158. Cassatt's Young Woman in Black (Portrait of Madame J) is on view for the first time beside Degas's Fan Mount: Ballet Girls which appears in the background of her painting.

Degas/Cassatt is organized thematically over four galleries with a focus on the height of Degas and Cassatt's artistic alliance—the late 1870s through the mid-1880s. Included are oil paintings, pastels, and works on paper (etchings, lithographs, monotypes, and drawings), with several that were once in the artists' personal collections. Cassatt stated that her first encounter with Degas's art "changed my life," while Degas, upon seeing Cassatt's art for the first time, reputedly remarked, "there is someone who feels as I do."

American industrialist Charles Freer met James McNeill Whistler in 1890 when, on his first trip to London, he paid a call at the artist's Chelsea studio and initiated a long and fruitful friendship. With Whistler's encouragement and cooperation, Freer built the most important collection of his works in the world, including the Peacock Room,* which is now a part of the Freer Gallery of Art.** An American in London: Whistler and the Thames will be at the Sackler Gallery of Art,** May 3 - August 17, 2014.

In the Gallery’s first major Whistler exhibition, more than seventy works—paintings of famed London sites in Chelsea and along the Thames River, as well as prints and rarely seen drawings, watercolors, and pastels—present a captivating survey of the artist’s unique depictions of a rapidly changing urban environment. The exhibition culminates with some of Whistler’s stunning, iconic nocturnes, including Blue and Gold—Old Battersea Bridge (1872–77).

* The Peacock Room is open during museum hours, but once a month it is shown in a whole new light. When the shutters of Whistler’s “harmony in blue and gold” are open, a flood of natural light turns the Peacock Room into a glowing jewel of blue, green, and gold tones. Details, colors, and textures are revealed in the sunlight—and a special filtering film on the windows minimizes fading.

** The Freer Gallery of Art and the Arthur M. Sackler Gallery form the Smithsonian Institution's national museums of Asian art. The Freer and Sackler galleries house the largest Asian art research library in the United States and contain art from East Asia, South Asia, Southeast Asia, the Islamic world, the ancient Near East, and ancient Egypt, as well as a significant collection of American art.