Artist George Catlin (1796-1872) journeyed west five times in the 1830s to paint the Plains Indians and their way of life. Convinced that westward expansion spelled certain disaster for native peoples, he viewed his Indian Gallery as a way to rescue their culture from possible oblivion.

Catlin delivered lectures, conducted tours, and hosted receptions for the press. Beginning in 1840, he staged the first Wild West shows. Early casts of characters featured Englishmen and boys dressed in costumes from the artist's own collection, who sang, danced, and whooped their way through mock battles.

In the spring of 1845, Catlin took a group from the Iowa nation and his Indian Gallery to Paris where their performances drew the interest of such cultural figures as Victor Hugo and Eugène Delacroix. When the Iowa returned to the United States, they were replaced in turn by a second group of Ojibwe, who so entertained King Louis Philippe that he asked them to perform for the royal family and invited Catlin to exhibit his collection at the Louvre.


On the heels of the installation of the Indian Gallery in the Louvre, Catlin was invited to exhibit in the Paris Salon, France's premier art show. Catlin was praised by Charles Baudelaire, the most important French critic of the age, for capturing "the proud, free character and noble expression of these splendid fellows in a masterly way."

Catlin lobbied the U.S. government for patronage throughout his career, hoping Congress would purchase the Indian Gallery as a legacy for future generations, but by 1852 he was bankrupt. A Philadelphia industrialist paid his debts and acquired the Indian Gallery, and soon after Catlin's death, the paintings were donated to the Smithsonian. Today, Catlin's Indian Gallery is part of the American Art Museum's permanent collection, recognized as a great cultural treasure, offering rare insight into native cultures, and a crucial chapter in American history. 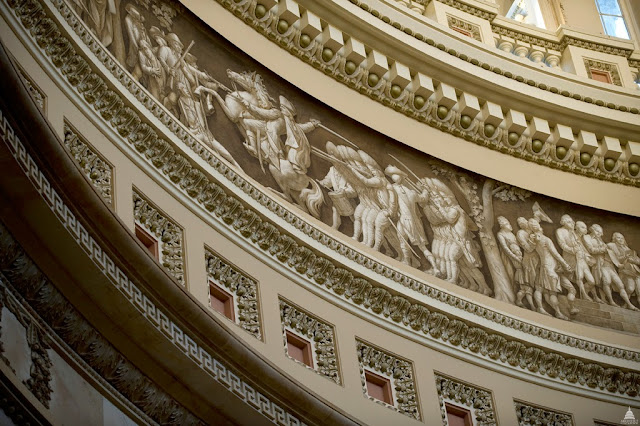 The Frieze of American History in the Rotunda of the United States Capitol contains a painted panorama depicting significant events in American history. The frieze’s 19 scenes is the work of three artists: Constantino Brumidi, Filippo Constaggini, and Allyn Cox. The frieze is painted in a monochrome of whites and browns that resembles sculpture. It measures eight feet four inches in height and approximately 300 feet in circumference. It starts 58 feet above the floor.

The frieze was painted in true fresco, a difficult and exacting technique in which the pigments are applied directly onto wet plaster. As the plaster cures the colors become part of the wall. Consequently, each section of plaster must be painted the day it is laid.

Begun in 1877, the Architect of the Capitol reported, "The belt of the Rotunda intended to be enriched with basso relievos [low relief] is being embellished in real fresco representing in light and shadow events in our history arranged in chronological order, beginning with the Landing of Columbus ..." The final section of the frieze was completed in 1953 and dedicated the following year.

The frieze depicts (click links below for detail of each section):


In 1986, Congress appropriated funds for cleaning and restoration of the frieze to remove accumulated grime, overpaint, and streaks caused by leaking water. The conservation treatment, completed early in 1987, restored the original details and vividly brought out the illusion of relief sculpture. Minor repairs were made in 1994.