The Dutch rose to greatness from the riches of the sea.  During the seventeenth century they became leaders in marine travel, transport, commerce, and security as their massive cargo carriers and warships traversed oceans and their small vessels and fishing boats navigated inland and coastal waterways.  Water was central to their economic and naval successes, but was also a source of pleasure and enjoyment.  In the warm summer months, dune-covered beaches offered scenic vistas, while in the winter, frozen canals provided a place for people of all ages to skate, play, and enjoy the outdoors.

In a nation of sailors and skaters, it is no wonder that marine subjects became a favorite of seventeenth-century collectors and artists alike.  Some painters delighted in capturing the marine environs in and around the Dutch coast.  Others turned their attention to the activity of frozen canals on a wintry day.  Many artists also depicted the open seas, including some who often sailed the seas themselves, rendered every imaginable vessel, from fishing boats and major transport ships to the great warships of the Dutch naval fleet, each formulating his compositions with extraordinary accuracy and attention to detail.  At the same time, they also introduced atmospheric light effects and various weather conditions to bring life and drama to their scenes.

From quiet harbor scenes and frozen canals to fierce naval battles and wicked weather, water had an extraordinary impact on art of the Dutch Golden Age. 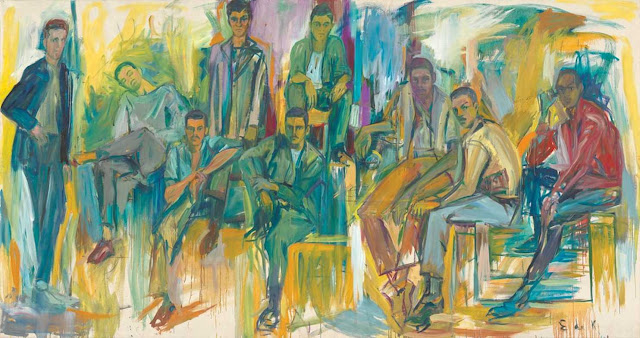 For a major show of her portraits at Graham Gallery in April 1963, Elaine de Kooning created this enormous group portrait, seven feet high and fourteen feet long, painted with thin washes and bold strokes of bright color. It depicts nine young men, sitting and standing in a variety of poses, each with a distinct expression—quizzical, contemplative, resigned.

The painting references both Rodin’s bronze sculpture The Burghers of Calais (1884–89) (seen below) and seventeenth-century Dutch group portraits, such as Rembrandt's The Night Watch (1642) (also seen below). The title is a witty reference to the Netherlands and to Amsterdam Avenue in New York City.

Elaine found the subjects through her friend Sherman Drexler, who was teaching art at an experimental treatment center connected with Riverside Hospital for youths with drug addiction and psychological problems. Two of the men who appear in the portrait, suffering from addiction, had worked for Elaine as assistants in her studio. She told a friend that she had terrible fights with one of them because he stole jewelry from her. Ultimately, he died a horrible junkie's death in a flophouse a few years later.

When Elaine finished her painting, she started packing it up to take home, but the school principal, concerned about the privacy of the underage subjects, refused to let her take it. In a cunning move, she covered the students’ faces in the painting with acrylic to appease the principal, and when she got home, she simply wiped it off.

In 1988, the Reagan's invited artist Keith Haring to paint a mural at the Easter Egg Roll held annually on Easter Monday on the White House South Lawn. The final piece, measuring 8' x 16', was then donated to Children's National Medical Center in Washington, DC. A photographer capturing the event whispered to Haring, "what are you doing here?" He whispered back, "same thing you are"—a reference to getting paid for being there. Sadly, the Reagan Administration never fully responded to the AIDS crisis, and Haring died two years later from AIDS-related complications. 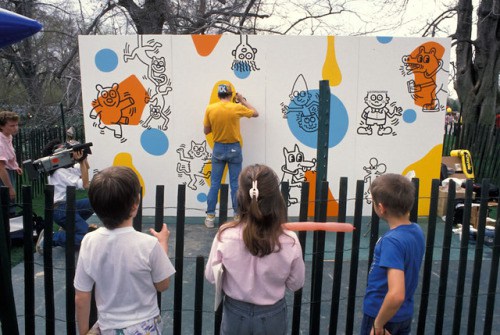 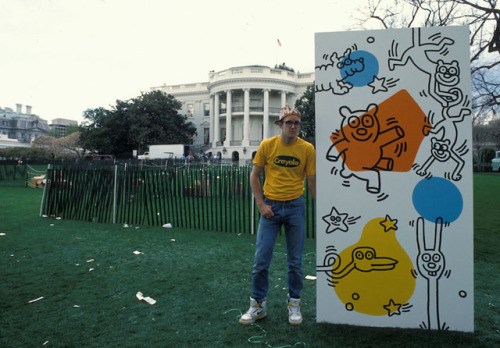 Easter Monday, named for the day on which the painting was completed in 1956, is the largest of ten grandly scaled paintings de Kooning exhibited at Sidney Janis Gallery that spring. In his review of the exhibition in Artnews, critic Thomas Hess likened the works to "abstract urban landscapes;" indeed, in its highly textured surface, swooping lines of paint, and glimpses of newspaper transfers, Easter Monday seems to reference the whirling pace and gritty detritus of the modern city. The transferred newsprint, particularly visible at the bottom and top right, remains aligned with the canvas's edges, enforcing the tenuously grid-like structure of the painting. Shot through with Rubensian flesh-like pinks and vivid blues and yellow, Easter Monday is a tour de force of de Kooning's 1950s style.

In the early days of the modern Olympics, artists battled for gold, silver, and bronze medals in architecture, sculpture, paintings and graphic arts, literature, and music. Art competitions were held at the Olympic games from 1912 to 1948. Winners of the art competitions were awarded medals, similar to the winners of the athletic competitions. The events were championed by Baron Pierre de Coubertin, who felt that in order to recreate the events in modern times, it would be incomplete to not include some aspect of the arts.

At the 1912 Summer Olympics in Stockholm, American Walter Winans took the podium and waved proudly to the crowd. He had already won two Olympic medals—a gold for sharpshooting at the 1908 London Games and a silver for the same event in 1912. However, the gold he won at Stockholm wasn’t for sharpshooting, but instead for a small piece of bronze he cast earlier that same year, a horse pulling a small chariot. For his work, An American Trotter, Winans won the first ever Olympic gold medal for sculpture.

Over the next several years, local audiences came out in numbers to see the sports-themed artworks. At the the 1932 Games in Los Angeles, nearly 400,000 people visited the Los Angeles Museum of History, Science, and Art to see the works entered, with some recognizable names in the competitions. John Russell Pope, the architect of the Jefferson Memorial, won a silver that year for his design of the Payne Whitney Gymnasium, constructed at Yale University. Italian sculptor Rembrandt Bugatti, American illustrator Percy Crosby, Irish author Oliver St. John Gogarty, and Dutch painter Isaac Israëls were other prominent entrants.

In 1940 and 1944, the Olympics were put on hold as nearly all participating countries became embroiled in World War II. Resuming in 1948, John Copley of Britain won one of the final medals awarded, a silver for his engraving, Polo Players. He was 73 years old at the time, and would be the oldest medalist in Olympic history (if his victory still counted). The 151 art medals awarded were officially stricken from the Olympic record and currently do not count toward official current medal counts.

Gertrude Stein on Comforts of the Past

In a 1934 interview, Gertrude Stein lamented that "people today like contemporary comforts, but they take their literature and art from the past. They are not interested in what the present generation is thinking or painting if it doesn't fit the enclosure of their personal comprehension. Present day geniuses can no more help doing what they are doing than you can help not understanding it, but if you think we do it for effect and to make a sensation, you're crazy. It's not our idea of fun to work for thirty or forty years on a medium of expression and have ourselves ridiculed."