Martin Celebrates His Father and Aviation History in Colombia

My father laid the groundwork that made me an artist.
Knox Martin | Barrinquilla, Colombia | December 2012 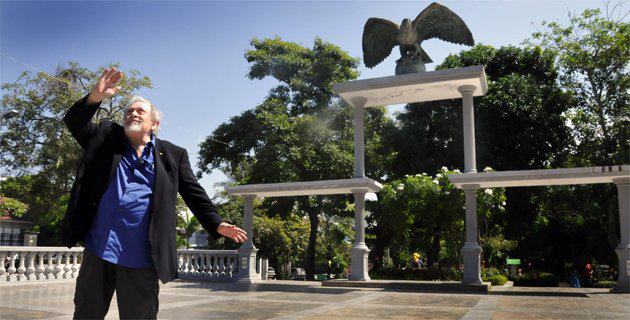 Artist Knox Martin is in Colombia celebrating his father's legacy as an aviation pioneer and the centennial of aviation in that country. Known as the father of Colombian aviation, William Knox Martin (1891 – 1927), was the first man to fly over the Andes Mountains. The fascinating life of Martin, Sr. is told here.

Knox recounts, "My father was also a poet and an artist, he gave me the wings to find my way, to paint, to fly, to touch the sky."  Above, the 89-year-old artist scans the skies beneath the eagle of Founders Park, one of the many sites that are part of this historic anniversary celebration.

Following the death of Secretary-General Dag Hammarskjöld, the staff of the United Nations set up a Committee and a Foundation to create a memorial to him and 15 others who died in a plane crash in Africa while on a peace mission, September 17, 1961.

The Committee invited artist Marc Chagall to contribute a piece of his work to the memory of Mr. Hammarskjöld and to all those who had lost their lives in the cause of peace. It was decided that the monument would be a free-standing piece of stained glass.

The panel, measuring 15 feet wide and 12 feet high, is predominantly blue in color. In it Chagall sought to express the simplicity and beauty of the ideals of peace and brotherhood for which the United Nations was founded. In the center is the figure of a young child being kissed on the cheek by an angelic face which emerges from a mass of flowers. The right side suggests mankind's yearning for peace, its prophets and its victims, and symbols of law. On the left are depicted motherhood and people struggling for peace. Musical symbols in the panel evoke thoughts of Beethoven's Ninth Symphony, which was a favorite of Mr. Hammarskjöld.

Initially placed in the southeastern section of the lobby of the Secretariat Building, facing the East River, the "Chagall Window" was later moved to the eastern side of the public lobby. It underwent an extensive renovation in 2001. 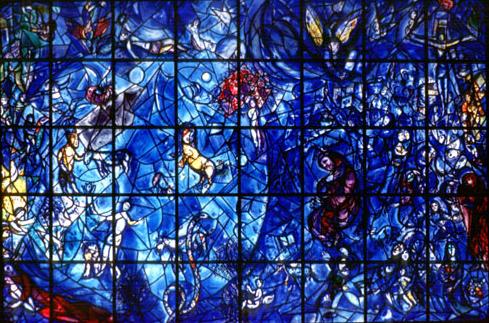 Stained glass has to be serious and passionate. It has to live through
the perception of light. For me a stained-glass window is a
transparent partition between my heart and the heart of the world.
Marc Chagall