This piece was originally written and published at Helium.com in April 2008 following my first meeting and visit with master artist, Knox Martin.

On a recent afternoon, my partner and I were invited to meet the artist Knox Martin. Martin has been active in the New York art scene since the early 1950s connected to and influencing many of the artists of the Abstract Expressionist movement exploding at the time. At age 85, he continues to teach at the Art Students League and pursue his own artistic endeavors.

We arrived at his office at 11:00 a.m. with a large bouquet of flowers, meticulously chosen and arranged by my partner who is also an artist. Martin opened the door, looked at us and said, "You're both too tall!" and then slammed the door. Before we had a chance to react, Martin quickly opened the door again, and with a big grin, invited us inside. My partner handed the flowers to Martin, who promptly handed them to Gaby Ryan, Knox's assistant for over 10 years, then groused, "Oh, great! Now I have to paint the [expletive] things!" We all laughed.

We sat down with Martin and talked about ourselves very briefly, but we really were there just to spend time with him and let him do the talking. After regaling us with a few encounters with other artists and collectors, he invited us into his studio. We were overwhelmed! When we first entered the studio, Martin handed me a postcard from a nearby table that announced his 2003 Caprichos show at the Janos Gat Gallery with one of his paintings on the front. I immediately said, "Oh, my God, this is 'Concert'!" Visibly impressed that I knew the painting, Concert in the Park, at first sight, he told me to keep the card.

A review of the Caprichos show in Art in America stated:

"Shown simply pinned to the gallery walls, the drawings are exhilarating in their freely drawn complex line, moments of vivid color and relation of form to the layering of space. They easily suggest the hallucinatory, storytelling landscapes of Mexican bark-paper drawings. Martin included his Concert in the Park (1955), a large, oil on canvas, roughly 7 by 12 feet that is allegorical and thoroughly painterly."

I stood in the center of the studio turning around and around, taking in everything Martin had tacked up or leaned against the walls in various stages of completion. He caught us with tears in our eyes admiring his work as we did many times throughout our time with him. Martin recited poetry, talked about teaching, his life, music, gourmet cooking, and, of course, art. It was amazing to receive this rich and colorful American art history so directly from a source that was part of it. Gaby was with us the entire time, sometimes engaged with us, but mostly she shadowed him, and helped him find things he wanted to show us. Around lunchtime, she brought out Brie, olives, flat-bread, nuts, and hot green tea to share with Martin.

We discussed his mural projects including the 12-story tall Venus, painted in 1970 on the side of the Bayview Women's Correctional Facility at 19th Street and West Side Highway now being obliterated, covered by a new building being constructed on a once-empty lot next door, and the whaling project mural symbolizing the abhorrent tragedy of commercial whaling. The latter is meant to serve as a vehicle to raise awareness of this significant threat to whales around the world. The funding is in place, yet the project is currently on hold as there is opposition to it being painted on the side of a school due to the violent act it depicts.

Martin sat in a rolling chair for most of our visit and he would reel himself closer to each of us individually or together at different times adding emphasis to the points he was making. His spirit, creativity, and love of life were intoxicating. The brief time we were with Martin, his warmth and generosity made us feel like we were the only people on his planet. He received a couple of phone calls during our visit and he would answer in a silly voice and playfully pretend to be someone other than himself.

After a little over three hours with Martin, we got up to excuse ourselves and say our goodbye. We asked if he minded if we took a couple of photos with him and he seemed excited that we asked. Martin asked Gaby to pull something out to show us and they unrolled one of his Caprichos works. The stunning piece made our heads spin! We had never seen anything like it. Tearfully, we hugged and thanked both Martin and Gaby for their tremendous hospitality. It was an unforgettable encounter with a man with a long and distinguished career. I can't wait to see wait he does next!

The Splendor and Art of the U.S. National Parks

In celebration of National Park Week, I wanted to take a moment to reflect on some of the artwork that glorifies the grandeur and spectacular geography in a few of the United States national parks. There are 84 million acres of iconic, treasured, and sacred places protected in America’s over 400 national parks. Some of these early paintings and illustrations would later help convince Congress to set aside America's first national parks.

For over 150 years, remarkable individuals whose vision, dedication, sacrifice—and sometimes even obsession—helped to create America's national parks into a cohesive national park system. They came from all walks of life, rich and poor; famous and unknown; soldiers and scientists; natives and newcomers; idealists, artists and entrepreneurs. With artists making their way West after the Civil War, they were inspired to paint and draw the splendor and largess of this vastly unexplored and untouched land that reached skyward far into the clouds and beyond.

In 1871, Thomas Moran boarded a train taking him to the far reaches of the western frontier. He had been asked to illustrate a magazine article describing a wondrous region in Wyoming called Yellowstone—rumored to contain steam-spewing geysers, boiling hot springs, and bubbling mud pots. Eager to be the first artist to record these astonishing natural wonders, Moran quickly made plans to travel west. Immediately upon his return home to Philadelphia, he began producing the paintings that would change the course of his career.

Albert Bierstadt’s beautifully crafted paintings played to a market eager for spectacular views of the nation’s frontiers. Bierstadt was a hardworking entrepreneur who had grown rich pairing his artistic skill with a talent for self-promotion. The unveiling of one of his canvases was a theatrical event. He sold tickets and planted news stories. A “great picture” was elaborately framed and installed in a room with carefully controlled lighting. At the appointed time, the work was revealed to thunderous applause.

Into the 20th century, popularity of the national parks grew exponentially with the onslaught of Americans traveling across country in their newly purchased automobiles. This included the accessibility of artists to more easily reach these bastions of inspiration.

One of those artists who continued to find inspiration in one of the national parks was Chiura Obata. A teacher at University of California, Berkeley, Obata was a Japanese immigrant and renowned artist who spent much of his career painting landscapes of Yosemite National Park.

During World War II, Obata and his family were relocated to an internment camp in Topaz, Utah, where he founded the Topaz Art School and encouraged his fellow prisoners to look to nature, as he did, for strength during the "intolerable sin" of their incarceration. After the war, he returned to teaching and took many trips with the Sierra Club to paint landscapes.

And, finally, an artist with whom we are most familiar today through his breathtaking photographs, Ansel Adams, became an influential force in the designation of Kings Canyon as a national park.

Adams' 1938 book, Sierra Nevada: The John Muir Trail, captivated President Franklin Roosevelt after Secretary of the Interior Harold Ickes showed it to the president. Roosevelt would not only designate Kings Canyon as a national park in 1940, but as a roadless park, leaving it completely undeveloped. Roosevelt's only access to the splendor of Kings Canyon would be through Adams' photography.

Adams' influence on the national parks was not limited to his efforts in Kings Canyon. His relationship with Ickes led to a contract with the Department of the Interior in 1941. Over the course of eight years, Adams traveled to every national park except the Everglades, capturing thousands of spectacular images for prominent display in Washington.

In 1899, Henri Matisse bought Paul Cézanne's Three Bathers from Paris art dealer, Ambroise Vollard who, in turn, had acquired it directly from Cézanne. Matisse could ill afford to spend money on other artists' works at the time, but was so moved by this piece that he signed a promissory note to Vollard and paid this debt off in installments.

Matisse wrote in a letter when he donated the painting to the Petit Palais, Musée des Beaux-Arts de la Ville de Paris in 1936:

"In the thirty-seven years I have owned this canvas, I have come to know it quite well, though not entirely, I hope; it has sustained me morally in the critical moments of my venture as an artist; I have drawn from it my faith and my perseverance; for this reason, allow me to request that it be placed so that it may be seen to its best advantage ... I know that I do not have to tell you this, but nevertheless think it is my duty to tell you so; please accept these remarks as the excusable testimony of my admiration for this work which has grown increasingly greater ever since I have owned it."

Matisse worked on his own Bathers by a River over the course of eight years. The genius of Matisse lies in the evolution of his masterpiece from its inception as two decorative pastoral panels commissioned by a wealthy Russian collector for his home to the final Cubist-inspired composition. The artist considered this painting to be one of the five most pivotal works of his career. 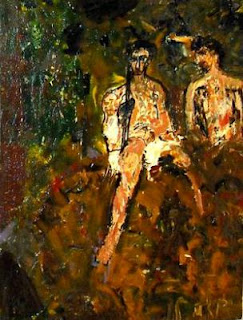